Monopoly, the Only Game played in the Energy Industry (1/4)

Let’s start with the basics that are understood. Energy and Water Utilities are built around jurisdictional borders. Therefore, this business sector is regulated, and the customer base is guaranteed. The Utilities do not have a need to compete with one another. They provide an infrastructure of long-term assets that are needed for our modern economy to flourish. The Utility Industry itself is mature, and the players are protected to guarantee costs that can be recovered while at the same time provide a generally modest but reliable revenue stream for its shareholders. When reflected, in the game of Monopoly, this would resemble the scenario that the game players have been playing long enough that all the properties are bought up. This makes complete sense at face value but is the game-changing due to technology and innovation? Maybe. 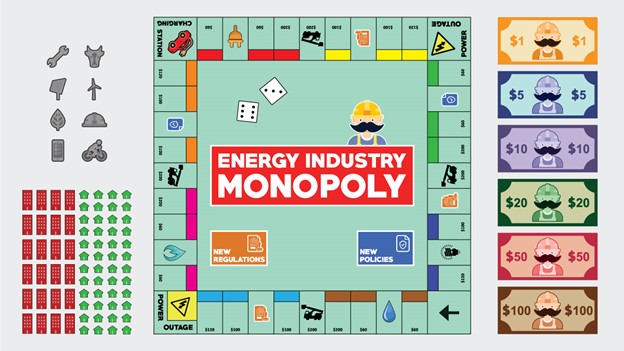 When you study the Energy market, generation, emissions, customer needs and the political environment around us, you need to consider there is a constant need to change. Throughout the world, policy and the “needs of the people” take priority. This is a phenomenon that has been ongoing since the creation of Utilities and is not looking to change anytime soon. With external issues such as a disaster, economy, protectionism, weather and even realities such as pandemics, we can observe how our Energy industry must quickly adapt. This adaptation is a regular occurrence. From a Monopoly game point of view, we can consider this as a rolling of the dice or landing on a board position where you need to pick a card. The change for Utilities is usually regional as the outcome requires the players in the game to make changes individually as the utilities legacy framework and legacy technologies are customized to their need. Since these systems are core to operations and customer management, they are unlikely to be replaced. This creates a strong exposure from these vendors by the utility to have what is known as strong Monopolistic traits. If Policy changes are required, costs are embedded in the game of monopoly and are usually undetected by all.

When we consider the cost of assets such as meters, poles, and other specialized equipment, you need to realize that it is considered appropriate to extend the life of all that equipment to stretch the payback of the equipment. There is a need to get a return on investment and reduce installation headaches of new technology and innovation that does not easily work with siloed legacy infrastructures that are built to monopolize. When you consider this at face value, you would think that this makes sense, but does it? Smart Meters for example have been mainstream since the early 2000s, yet the consumer and other third-party solutions can’t integrate to them easily or at all. Does this really help when the future is supposed to be moving towards smart grids and smart buildings? In most cases, it is not the fault of the Utility. It has to be blamed on the industry as a whole. In fact, in recent years, the evolution of “smart” is becoming dumber as the hardware has evolved to reduce features for interoperability and openness in consideration of cost and ease for the Monopoly actors to become more embedded in the playing board. The fact is, the original Smart devices that were first introduced had more potential to be smart than the new devices offered by hardware vendors. This lack of evolution further locks in the technologies interoperability and offers a longer-term asset base for the cost to be recovered. But it also greatly reduces options to change the playing board. Utilities become stuck with advisors and consultants that embrace the world of reducing change to keep their specialty relevant and to manage the risk-averse world of a Monopoly game that has no end and a limited change in the player’s board position.

When you consider data standards in the Energy industry, they lack the concept of innovation that is embraced in most other industries. Energy market-driven standards create a vacuum where interest dwindles. Speed to market becomes a game of conflicting interests and openness. Inclusivity of innovation and new market opportunities are lost and a general acceptance of reality in the new economy and global trends is removed. The outside world is moving at a pace not achievable when utilities, regulators and 3rd party vendors are involved heavily in the game of Monopoly.

Most, if not all Energy market-driven data standards built to innovate have failed and are destined to fail unless they are focused on legacy solutions that want to further embed their solution set into a utility infrastructure. This legacy building block process is sadly considered normal in a world where the Monopoly playing board doesn’t change and the players and actors stay the same. It is the age of digitization, isn’t it? Has this method of standards development become extinct like in most other industries due to its ineffectiveness to be inclusive of innovation?

Today’s technology advancements and the need for rapid standard change is here now. Other business sectors require a rapid change to deal with the cost, IoT, security and privacy issues as information socialization evolves. This evolution of rapid change does not exist in the Energy industry unless required by government policy. Even then there need to be parties that manage and evolve standards in the way other industries do (quickly, efficiently and removing bias to the existing Monopoly game player). It is a reality that our Monopoly board we play on in the Energy industry is flawed because the existing Monopoly board players and gameplay strategies never change. It makes data management and innovation progress insignificant by today’s standards and market needs.

We live in an evasive digital economy that has enemies wanting to find ways to cause havoc. Energy-focused standards take many years to evolve and create risk on the same infrastructure that they are trying to help make more efficient. When we have an intruder that hacks their way into an energy infrastructure, its usually caused by inadequate responsiveness to the changing IT environment, the lack of changes by legacy technology providers or the inability to remove key systems that no longer have support. This situation is like someone coming by your Monopoly board and moving it slightly. You know something happened to the board, but you really don’t understand the real effect on the game, and you try to forget it ever happened because it’s too hard to figure out. Utilities just need to hope the board doesn’t get hit too often because someone else may notice. The fact is, change is happening all around us and innovation is approaching so rapidly that it may cause events that will change the game that is being played forever.

These Energy industry standards are never ready for prime-time, they usually have issues that are inherent to who and how they are created and managed. Due to the evolving digital world outside the Energy industry and the lack of progressive change in these data and communications standards, they are eventually abandoned as there are no longer the people in place to update the standards because they have gotten too old. These standards become a legacy of red tape and strategic positioning. It is clear the Energy industry needs to do better. It is not in a good position to manage its own digitization destiny when you consider the game of Monopoly being played and the position the utility is in by its legacy providers compared to the outside world around them.

Is the true issue with the industry itself? Is it an issue of monopolistic traits moving up and down the Utility business channel? Siloed business groups with siloed IT systems, working with siloed hardware with industry-focused on siloed standards. Does this sound monopolistic to you? In many cases, we will never know, as this industry itself is company-focused, regionally controlled and government regulated. The fact is that monopolies are hard to recognize in this market. Business can go on as usual without change or challenge because very few of us understand or remember starting this game of Monopoly or the ongoing moves and actors. We still look at it in its siloed state, conditional only on the dice and the playing cards you pick up.

As a cliff-hanger to our next article in this series, you must imagine that there should be an easy way out of this never-changing Monopoly game. It comes down to the future. Do Utilities and government supporters need to change to create a new Monopoly game board? Do utilities have unexplored opportunities to discover being a source of the digital economy? Do Utilities want to be key players in the future of energy and energy evolution? If they do, they need to look deep into their future and remove the roadblocks and red tape to a new opportunity. This includes ensuring the data they work with is free for them to use. What is stopping this change? Next, let’s discover the Monopoly game being played with internal IT systems, hardware assets and data exchange. If you have ever played a Monopoly game where no one wins and nothing changes, it gets boring and in the end manipulation of the game is destined to create a true monopoly state where no one wins. Well, maybe some do as they have protected their position in a game that has no end. Utilities, innovation and the customer will find a way to work together effectively because the world of innovation is here, and we are not going away.

Screaming Power is revolutionizing customer engagement by providing a mobile platform that connects the energy user, allowing for effective and secure two-way communications to educate, change behaviour and encourage sustainability. Our extensible Intellectual Property provides a low-cost, digital infrastructure for a self-sustaining Eco-System. Our Scream Utility & Scream Enterprise mobile solutions focus on reducing ‘cost-to-service’ for utilities while driving satisfaction and facilitating the delivery of innovation (e.g., connectivity to the IoTs).

This website uses cookies to improve your experience while you navigate through the website. Out of these, the cookies that are categorized as necessary are stored on your browser as they are essential for the working of basic functionalities of the website. We also use third-party cookies that help us analyze and understand how you use this website. These cookies will be stored in your browser only with your consent. You also have the option to opt-out of these cookies. But opting out of some of these cookies may affect your browsing experience.
Necessary Always Enabled
Necessary cookies are absolutely essential for the website to function properly. This category only includes cookies that ensures basic functionalities and security features of the website. These cookies do not store any personal information.
Non-necessary
Any cookies that may not be particularly necessary for the website to function and is used specifically to collect user personal data via analytics, ads, other embedded contents are termed as non-necessary cookies. It is mandatory to procure user consent prior to running these cookies on your website.
SAVE & ACCEPT

Vietnamese
Our Spring Sale Has Started

You can see how this popup was set up in our step-by-step guide: https://wppopupmaker.com/guides/auto-opening-announcement-popups/