This Case Study details a roll-out of an Enterprise-branded mobile solution focused on managing energy and Greenhouse Gases (GHG) for the City of Toronto’s portfolio of buildings.  A roll-out of this kind has many challenges – including the size of the data set, data standardization and frequency, operational requirements, security, accuracy, analytics, privacy, policy, IT, administration and education. This Case Study examines the challenges and the outcome of providing a mobile enterprise engagement solution from a templated cloud, mobile App solution for iOS and Android mobile devices. 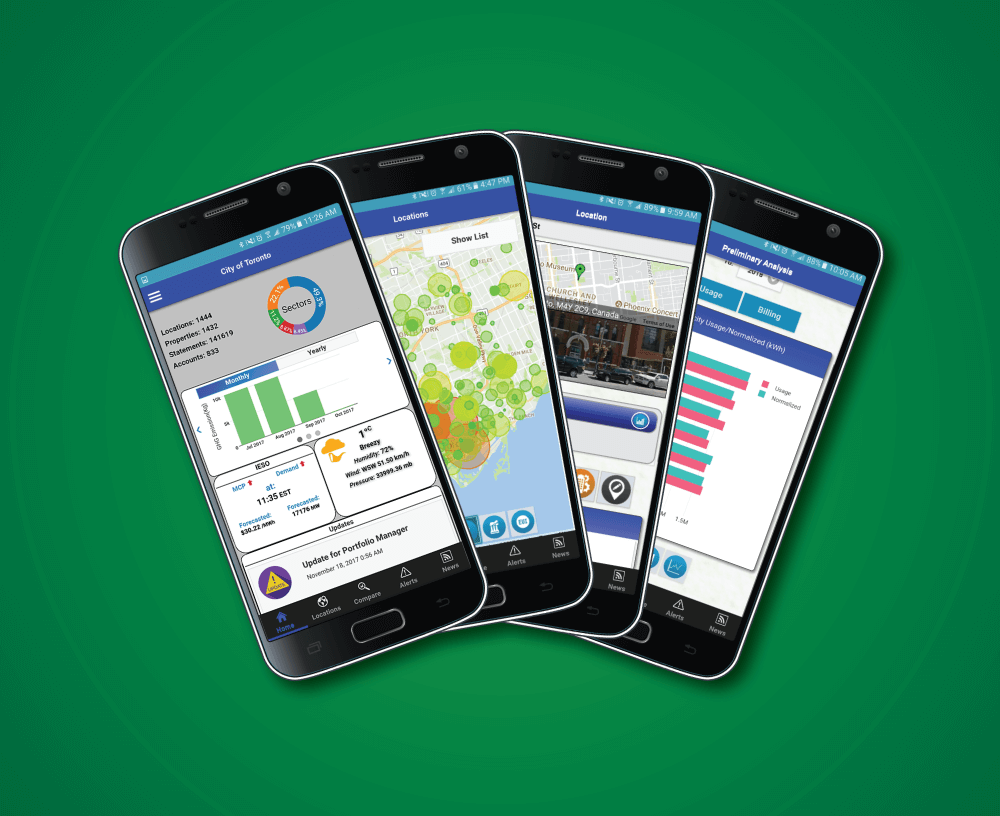 Screaming Power has been developing a mobile solution set for several years and partnered with the City of Toronto through its Green Market Acceleration Program to create a user-friendly solution to help Toronto’s Environment and Energy Division manage, share and report energy information.  The Pilot’s goals were to consult with the Environment and Energy Division to build a prototype mobile app that helps educate and inform the City, while aiding in achieving its building and energy footprint goals.

There are multiple implementation elements to be looked at in this Case Study that are presented in this list:

This Pilot Demonstration was highlighted to:

The Intellectual Property (IP) that Screaming Power started with had 3+ years of research and development and encompassed over 550,000 lines of code that managed various aspects of the application, server and features needed for the Enterprise Solution.  As time went on, the application also used code being developed from Screaming’s Customer Engagement Utility solution. This IP foundation allowed Screaming to provide a branded prototype solution for the first formal meeting using The City of Toronto’s energy and building data already available in the public realm. Once the initial meeting was complete and the first version of the Enterprise solution was being reviewed, the task was to allow the Subject Matter Expert (SME) at the City to be active in evolving the solution to meet the City’s needs.

The SME became engaged quickly, as he had something concrete to work with right away.  It was realized early on that the SME required a process to be continuously involved in the application’s evolution, so it was imperative that a process be put in place for the individual to continuously have the pilot application in the palm-of-his-hand. This way, the SME could better understand the progress and comment on their specific needs related to evolution of the Enterprise solution. Once the mobile app process was put in place, regular updates were provided directly to the SME’s device and short meetings were held every week or two, where Screaming Power discussed changes with the SME, other invitees from the City and sometimes external energy supply partners were invited.

When the City’s open data was presented in the solution, it became obvious that more information would provide more power to the users of the solution.  The SME decided to focus on a data feed that other organizations could use in the future and requested that the solution integrate with the City’s data source for building information (i.e., its Energy Star, Portfolio Manager account where there was already over 100,000 energy bills available).  With this request, Screaming soon became engaged with the US administrator of Portfolio Manager. Within a few days, testing was completed and Screaming became approved to share the City’s data with the Screaming Enterprise solution.

Through discussions with the City, it was suggested that a more flexible electricity pricing signal from the electricity market operator (IESO) would help with the City’s decision making for demand management.  Screaming reviewed the IESO’s existing public offering and decided it could build a proprietary forecasting tool for the City using machine learning.  After a week, Screaming Power created a forecasting algorithm that took historical data as far back as 2002 and continuously trained its modeling-forecasting tool on a five-minute basis.  With the addition of automatic notifications to the mobile App, Toronto had the tool it was looking for.

The addition of GHG calculations in the solution provided the City and Screaming Power added challenges, as there is more than one standard for calculating GHG emission’s in Canada. Screaming decided to use the same calculation that Energy Star’s, Portfolio Manager uses, as it would be wise to standardize on a calculation already in use.  Once Screaming implemented the standard, it came apparent that the Government’s electricity Coefficient used was not as accurate as needed, but it was also a standard used widely in the marketplace, so Screaming decided to use the Government’s Coefficient for the short-term.  As of the writing of this document, Screaming has come up with a more accurate coefficient using real-time electricity generation, so the City can see their electricity GHG emissions on a more real-time basis.  Once research is complete, the results will be presented to the City.

As time went on, it became apparent that the solution had to present information differently for different parties, dependent on their expertise and need.  The solution needed to help manage conservation projects, operations and building issues.  As well, the solution needed to be multi-user friendly and administrable through a web-based administration. Screaming began evolving a back-office admin and a flexible mobile app Dashboard, so the City could easily manage the App and its user types through different interactions and presentment.  Screaming had one focus – to reduce the management of information and data, while allowing the Toronto to properly interact with the information in a controlled but diverse way. As this feature set evolved, Toronto’s Electricity and Natural Gas providers decided to add into the Enterprise solution the past and existing projects they are working on with the City.  The providers also became interested in the power the solution provided to them, as they were given the opportunity to be more involved with the City and their projects in order to provide a more customized and active role in helping the City meet its goals.

As the back office evolved and new data flowed in from other parties, it became apparent that there was a need to use machine learning to resolve data anomalies, as the solutions goal was to reduce the City’s IT costs, not increase them.  Once machine-learning algorithms were put in place to validate data, the multi-sourced information was properly reviewed and validated through a NO-ETL process before the information went to the app.  As solution development continued within the App, server / connectivity, security and privacy issues came up on a continual basis and discussions around process, data flow, access and authorization were constantly challenged and resolved.

As a result of customizations and new third-party integrations, the pilot solution took longer than initially expected to complete.  This was in part due to the fact that once one development phase was complete, it became apparent that new features would continue to enhance the Solution. The Pilot still took under 5 months to complete and the scope of project was constantly increased.  Considering the hurdles encountered and overcome, as well as the fact that the continued addition of new data had challenges, the added time spent was well worth it, as the SMEs began to see the power of the solution and Screaming ensured the solution was set-up for quickly adding more features, as newly discovered needs arise.

As of November 2017, the Solution is available to the City of Toronto in iOS and Android.  There were many observed results for the solution:

It’s always interesting to get feedback from the individuals using an App.

We asked our SMEs (Subject Matter Experts) from the City of Toronto the following questions:

Did this project assist you in understanding the potential of mobility?

SME:  The benefits of mobility are well understood, but utilizing the potential for building operations and granular energy management was not considered prior to discussions with Screaming Power.

What was the biggest issue/concern that came up which was not expected and was it resolved?

SME:  Data availability and currency were a concern in the early stages, but this was overcome through integration with Portfolio Manager and automated updates.

Did the end result surprise you? Why?

SME:  The end result was not a surprise, but the speed at which Screaming Power implemented changes and was able to modify coding, when necessary, was.

If there was one thing you could have done differently, what would it be?

SME:  More involvement from SMEs from within the City could have provided more diversified feedback in the early stages.

How was your relationship with the individuals you worked with at the beginning? Is it different now?

SME:  Measurement and verification of implemented energy measures is an integral part of any project. A user-friendly tool, such as mobile technology, to identify building changes and potential adjustments to savings calculations will improve the City’s ability to quantify project results.

The Pilot program through Toronto’s Green Market Acceleration initiative provided great value for everyone concerned.  Without this type of pilot, engagement between the parties would not have been possible.

Results of the Pilot showed that Screaming’s use of its existing IP helped create a cost-effective solution template that helped everyone understand the possibilities and future opportunity.  There were many unique obstacles that had to be overcome while working with the City. Shared expertise and technology enhancements resolved any possible roadblock, yet it is hard to say that Screaming created a perfect template for the future, as every enterprise environment will have its own challenges.  One thing proven in the pilot is that there is no obstacle that can’t be resolved with innovation and expertise.

The solution set created could meet the demands of the large data sets provided by the City and integration to unique forms of information was accomplished through the development of analysis tools which can be reused.  The timeframe needed to create a branded Enterprise pilot was achieved yet it is important to understand that added third party information can cause delays in integration while the function and formats of this information become understood.

The information readily available through the app was enough to provide value within the pilot, but the addition of more detailed information will allow for even more opportunities to use this information to reduce energy / GHGs on an ongoing basis by providing a more transparent view of data to support the City’s Continuous Energy Improvement efforts.

The Solution’s capabilities to interact, educate and train was demonstrated without any added IT costs to the City of Toronto and the pilot did exceed the initial expectations of Screaming Power. In addition, there are anticipated future benefits for the City and others using this technology through its Continuous Energy Improvement efforts. 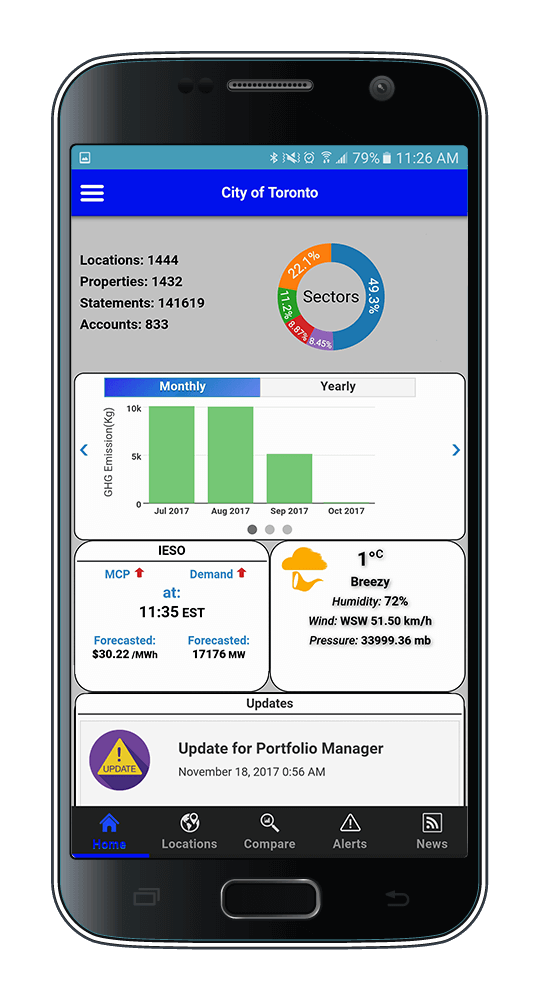 This website uses cookies to improve your experience while you navigate through the website. Out of these, the cookies that are categorized as necessary are stored on your browser as they are essential for the working of basic functionalities of the website. We also use third-party cookies that help us analyze and understand how you use this website. These cookies will be stored in your browser only with your consent. You also have the option to opt-out of these cookies. But opting out of some of these cookies may affect your browsing experience.
Necessary Always Enabled
Necessary cookies are absolutely essential for the website to function properly. This category only includes cookies that ensures basic functionalities and security features of the website. These cookies do not store any personal information.
Non-necessary
Any cookies that may not be particularly necessary for the website to function and is used specifically to collect user personal data via analytics, ads, other embedded contents are termed as non-necessary cookies. It is mandatory to procure user consent prior to running these cookies on your website.
SAVE & ACCEPT

Vietnamese
Our Spring Sale Has Started

You can see how this popup was set up in our step-by-step guide: https://wppopupmaker.com/guides/auto-opening-announcement-popups/